I’m presently working on an extensive post about the Babalon Matrix, a magical device which has been used in conjunction with Reiki among other metaphysical systems. That’s a more advanced topic, however, and before I get into it I would like to introduce my readers to something that is essentially the Matrix’s little brother: Crystal Grids1.  It should help to provide a foundation for the later material.

What is a Crystal Grid?

At its core, a Crystal Grid is a way to arrange and link crystals to create a field of energy.  This energy can then be applied for purposes such as healing, protection, manifestation, and many other things.  Quite possibly the only limits on what they can be used for lie in the imagination of the practitioner.  If there is something that you would like to direct intense, sustained energy towards, crystal grids may be the perfect tool.

The simplest form of grid that I’ve worked with uses five crystals.  It is laid out in a circular pattern, four crystals forming the border of the circle and a fifth at the center. 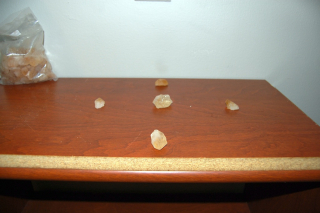 If you like, the four boundary crystals may be aligned with the four cardinal or magnetic directions, or to any other external reference points you would like to work with metaphysically.  This is optional, and the grid will function just fine without such alignment.

If you are a reiki practitioner, it can be helpful to attune the stones before using them in the grid2.  Alternately, you can attune the grid itself once the links are created.  However, using Reiki with the grids is not necessary, and they will function for anyone.  For those who are not Reiki practitioners, charging the stones or grid with whatever forms of energy you work with may also serve to help empower the grid.

Now that you have the grid, you’re probably wondering how exactly you use it.  Focus on the center stone.  It’s the core of the grid.  Try to connect with it, communicate with it, ask it to help you manifest your intention.  I don’t personally recommend the practice of “programming” crystals3, as I view all stones as alive and intelligent and far older than any of us, but if that’s a practice you work with it could be used too.  My own practices tend towards working with the stones as conscious allies.

If you’re using the grid for distance healing, it can often be helpful to have set it up so that the center stone is resting on a picture of the person to be healed, or other physical link to the recipient.

Once you feel that you have aligned the grid with your intention, focus on the center stone again and slowly feed it as much energy as you can create or pull in from external sources.  Visualize it and the other stones of the grid and the lines connecting them glowing brighter and brighter as energy is added.  When you feel that you’ve added enough, stop and just hold the glowing grid in your minds eye for a few more moments.

You may want to take this time to state any affirmations you may have for the working, or even simply “so mote it be”, though such affirmations are not necessary.  Then just leave the grid in place, and as long as it is not significantly disturbed it will keep running, though it can be a good idea to occasionally add fresh energy as guided by intuition for a grid that is set up for an extended period of time.  Significant disturbance will require that the grid be reactivated, but is otherwise not a cause for alarm.

Once you’ve worked with the standard grid for a while, you’re probably going to want to move on to more advanced grids.  Here you have a lot of options.  You can change the types of crystals you’re working with.  You can use stones that are not crystals.  You can even use objects that are not stones at all.  I have used as elements of grids everything from ritual weapons to candles to animal bones to charged chunks of driveway gravel.  Use your imagination and see what works for you.  Anything that can take an energetic charge can be used.  Nor are you limited to the basic pattern that I have given here4.  There are many other popular grid patterns based on sacred geometry5.  Any of these will work.  It is also quite possible to create grids using no set geometry, and just feeling intuitively for patterns that will work and balance the energy in the right way for your working.  You can even set up multiple grids, and link them together.  I find this creates an effect that I can only describe as resonance that strengthens the fields of both grids dramatically.  Finally, you can link your grid to external energy sources such as the sun by visualizing a line of energy linking these energy sources into the grid much like the lines linking the stones.  This will allow them to remain active longer, and the link will dissolve on its own if the grid is dismantled.

In July 2007, my grandfather was in a nursing facility for physical therapy following cancer surgery.  He was 93 years old, and he was not facing the situation very well.  He very nearly gave up hope, thinking he would be stuck in the nursing facility for the rest of his life rather than being able to go home again.

I went up to New Jersey to visit him in the nursing facility.  My parents were, at the time, visiting from Minnesota as well.  My grandfather wasn’t looking so great.  I barely recognized him when I first saw him; he looked more like my memories of his father, my great-grandfather, than I had ever seen him looking before.  He was complaining that whole day about having to sit up all day rather than being allowed to take a nap.  The staff were trying to build up his endurance again, and he wanted no part of it.  He didn’t think he was going to get well.  He was dealing with depression.  And from what I was told, he had been for weeks.

My parents know about my metaphysical practices to some degree, and my mother at least believed in them enough to ask me to do what I could.  Direct Reiki work at the nursing facility did not seem to be helping much.  So, when we got back to my grandfather’s house that evening, I decided to approach the situation from a different direction.  I created a grid for him, and used it to empower a ritual asking his departed wife and other departed friends and relatives to do whatever they could to help him.

The next day, when we went back to the nursing facility, my grandfather was in a much better mood.  He told us that he had gotten a great night’s sleep.  And without prompting he started talking about a dream he’d had.  A dream involving his wife, and his departed friend Sam Shore, and a bunch of his other old friends coming to visit him.  Many of whom we’d invoked by name the night before.  Then out of nowhere he started singing an Irish drinking song and talking about an Irish relative we’d also very explicitly invoked the night before.  The look on my father’s face at this was priceless, and my grandfather’s recovery progressed much more rapidly after that.

Below is a picture I took of that grid.  Obviously, it’s a lot more complicated than the standard grid layout, but basically the same principles were used to create and empower it.  It should stand as an example of some of the more advanced grid work that is possible.  And it will help me illustrate one last mutation:  pictures of charged grids that have existed previously can serve as proxies for physically recreating the grid.  In a way, the picture captures something of their “soul”, and provides a link into their energies, even if the grid no longer exists. 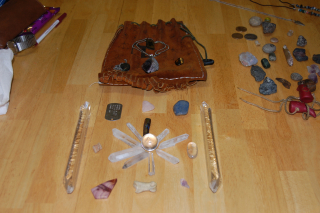 I own the site. :)
View all posts by Jarandhel Dreamsinger
Subscribe
Login
Please login to comment
1 Comment
Oldest
Newest Most Voted
Inline Feedbacks
View all comments